Every month Coral Club selects a list of products and offers it at either a discounted price or at '...

Staying happy and stress free as much as possible is key to living a longer and healthier life. When...

Whether you’re looking to improve your health, your physique, or even to achieve a combination of bo...

Acai berry, like many other berries that fall in the category of super foods pack a great punch of n...

Acai nutritional products are derived from the acai palm tree grapes. The palms are found in the Sou... 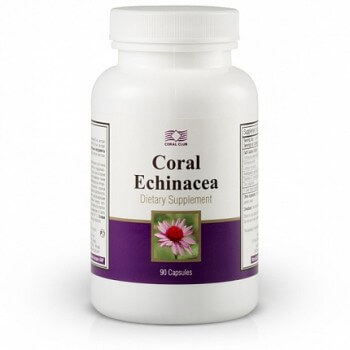 * Upon clicking this button, you will be redirected to the official Coral Club online store, where you can check product's current price as well as its availability.

** In order to view club member prices (20% discount), you must sign-in as a club member. If you aren't a club member, you can sign-up for free. Just click REGISTER in top right corner of the page.

How and where to buy Coral Echinacea?

Echinacea boosts immunity by increasing the activity of leucocytes and macrophages, and by improving production of the protein interferon that plays a special role in immune response.

Active ingredients of Licorice root regulate immunity and have anti-inflammatory and adaptogenic effects.

Zinc as a trace element is directly involved in optimization of the immune system.

Take one capsule two times a day with a meal.